RATIONAL HOPE, OR A MERE DREAM?

Writing of his baptism in the Trinity United Church of Christ, Barack Obama said that “kneeling beneath that cross on the South Side of Chicago, I felt God’s spirit beckoning me. I submitted myself to His will, and dedicated myself to discovering His truth.” To a committed Christian considering support for a political candidate, such statements would be encouraging signs. They would be useful criteria also by which to judge an elected candidate’s conduct. 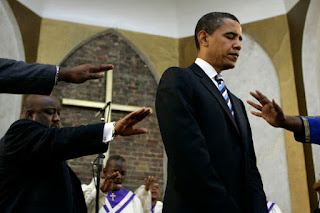 The original purpose underlying this article was to highlight lessons from the life of Barack Obama for Catholics (especially in the energetic and the languid ) who are interested in acquiring power for good purposes. Engagement in that work brought, however, a realisation that Catholic-significant aspects of President Obama’s life should be combined with a comparison, from a recognisably-Catholic standpoint, of the situations in the and in . Lessons can be clearer and more memorable when learned in their appropriate contexts. So before focusing predominantly on President Obama, it will be useful to take a broader view.

For a long time, black Americans were down-trodden by law and culture; today, so are recognisably-Catholic principles. That should matter to us. Catholicism and its adherents are recognisable as such to the extent that they differ from other creeds and people. If we sink those differences we sink our religious identity, and the faith goes down with us. Pope John Paul the Great, never one to sink, said that “gives the impression of ‘silent apostasy’ on the part of people who have all that they need and who live as if God does not exist”[1]. The same applies here. In 2002 Cardinal Murphy-O’Connor (not famous for discontentment) said that “in and today Christianity as a background to people’s lives and moral decisions is now almost vanquished” and noted the (long-obvious) “secular outlook in our society which ignores the Gospel: it does not know it and it does not want to”[2]. The situation is worse now, especially in the law.

Typical Catholics seem uninterested in this. Parishes lack any significant counter-revolutionary activity. Now-retired Bishop Patrick O’Donoghue of found languor and reticence, even hopelessness in the Church. He wondered what had caused it, and lamented ‘back-pedalling’ on fundamental principles[3].

Despite Scriptural and high ecclesiastical exhortation to conform society to God’s laws, attempts to energise defence of controversial Catholic teachings are either deftly turned aside or met with a “granite exterior” or a “puzzled stare”[4]. Clerics will, of course, dispute that, but their ‘look-on-the-bright-side’ policy is characterised by vagueness and incapable of ending the endemic torpor. 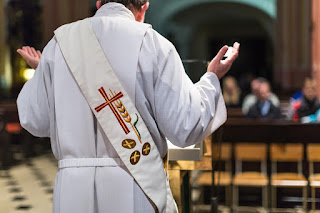 At one time things were bleak also for black Americans, but an important difference between their position and that of British Catholics is that here the challenges are directed at Catholic principles, whereas there they were directed at practicalities in blacks’ daily lives. Black Americans could not have shrugged and answered lamely, ‘But it doesn’t affect us,’ because it did. If, however, typical Catholics in today were asked to fight this or that un-Catholic law or practice, many would shrug and answer lamely, ‘It doesn’t affect us.’ Practicalities outweigh principles.

Indicative of a wish to make religion recognisably (although – a very important proviso –uncontroversially) ‘relevant’ and thereby stem the loss of ‘credibility’ in an ever-more secular society, statements by the hierarchy give material matters at least equal weight with subjects which seem comparatively peripheral to people’s ‘normal lives’. Similarly, politicians often neglect ‘moral’ subjects and promote attention to those which ‘people care about’/ which ‘matter to people’. Promotion of ‘marriage’ status for same-sex relationships was an exception to that. Catholic bishops did speak up against same-sex ‘marriage’ (although not very cogently), but not long beforehand Archbishop Vincent Nichols (as he then was) said during a televised discussion of Pope Benedict’s visit to that the hierarchy’s priority-subjects are poverty and education[5]. Those subjects are indeed addressed directly by Church teachings, but they are not distinctively-Catholic subjects. The comparative neglect and ‘soft-pedalling’ on other matters, especially the greatest modern triumphs of secular permissiveness, reflects the fact that very few Catholics in Britain show any concrete interest in what does not affect them materially, directly, and recognisably. That is a formidable obstacle to the reversal of secularism. 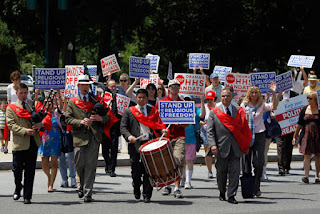 As well as apathy within the Church, Catholic counter-revolutionaries have to consider how best to defeat adversaries outside it. During the secularists’ rise to power, they had to consider how to defeat us, in so far as the law enshrined our principles, just as American ‘civil rights’ campaigners had to consider how to defeat deeply-entrenched resistance. Probably the greatest practical asset was the existence of a large body of supporters who cared enough to respond. Opinion produced practical effect because of “those who marched and those who sang, those who sat in and those who stood firm, those who organized and those who mobilized,” as President Obama described them. There is no equivalent body of Catholics in or ; that is the greatest difference between achieving civil rights for black Americans and re-asserting down-trodden Catholic principles.

Former “Catholic Herald” editor Peter Stanford has written that the Church “instinctively keeps a low profile and shrugs off criticisms rather than confronts them,” but that this is “now being mercilessly exploited” by “the new breed of abrasive secularists.” He wrote that the “innate reluctance to be drawn into public confrontation,” and “to hammer home…contentious Catholic teachings,” is a “legacy of the history of the faith here and its accommodation to the prevailing norms of the wider society.” He described this as “being realistic,” and as “pragmatism”[6] . 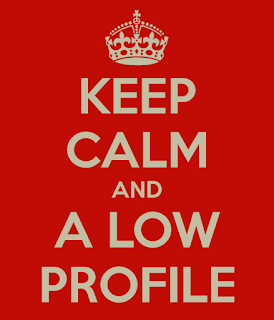 It amounts to an admission of subservience, perhaps with an underlying (and hitherto-unfulfilled) hope that we can turn our adversaries’ criteria against them (e.g. ‘equality’) just as they have been adept in using ours against us (e.g. ‘conscience’). According to American Catholic Judge Albert C. Walsh, St. Thomas More wrote, in “Utopia” (p.47f): “…that which you cannot turn to good, so order it that it be not very bad”[7]. The temptation to ‘make the best’ of an unsatisfactory situation is understandable. Everyone can see the attraction of ‘why hold out for perfection when you can’t get it?’ Courage v. compromise. It is true that “when valour preys on reason, it eats the sword it fights with”[8], but a rather similar result arises when pragmatism preys on principle. 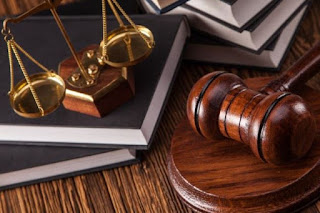 The black civil rights campaigners in managed eventually to persuade the Supreme Court that the language of the law was on their side, and to persuade the Congress that further laws were needed. It was the psychological weight of sustained large protest which wore down resistance. Black Americans believed in the justice of their principles, and (aroused by strong leadership) had enough tenacity and perseverance to win. Those factors are lacking among Catholics, not only where Catholics are a minority but also even in the few places where they are, at least nominally, a majority (ascertainment of the true numbers is impossible, because (i) a claim to be a Catholic is not a reliable indicator of beliefs (“A man may claim he loves his wife. His wife will want to see the evidence. … Saying we’re Catholic does not mean we are, except in the thinnest sense”)[9], and (ii) self-declaration is not conclusive)[10].

A lamentable example occurred in October 2016, when the Parliament of (according to the Reuters news-agency) “staunchly Catholic” rejected by 352 to 58 a Bill which, reported Reuters, proposed “a near-total ban on abortion.” Reuters described the result as “an embarrassing setback” for the Polish Government and for “the powerful” Catholic Church. For two reasons, that seems an untenable conclusion. Firstly, the Government withdrew its earlier support for the ban; so apparently it wanted the result which occurred. Secondly, Reuters seemed to contradict themselves by alleging that the Church’s influence has been “steadily eroded” (by democracy and “market reforms”). Obviously it is not powerful enough to procure a much-improved compliance of the law with this fundamental aspect of Catholic moral doctrine[11]. The impossibility of achieving that even in emphasises that it is a mere dream elsewhere. A 100,000-strong public protest against the Bill was ‘credited’ with swaying the vote (and thereby negating 450,000 signatures on a petition supporting it). Lesson: results depend on whether the powerful are receptive to a campaign, not necessarily on the number of campaigners. Few power-holders are receptive to distinctively-Catholic moral principles. ‘Empower allies of Catholicism’ is the solution, but there is no practical effort to do so.

Such failure to give practical effect to Catholic principle is a grave dereliction of duty.